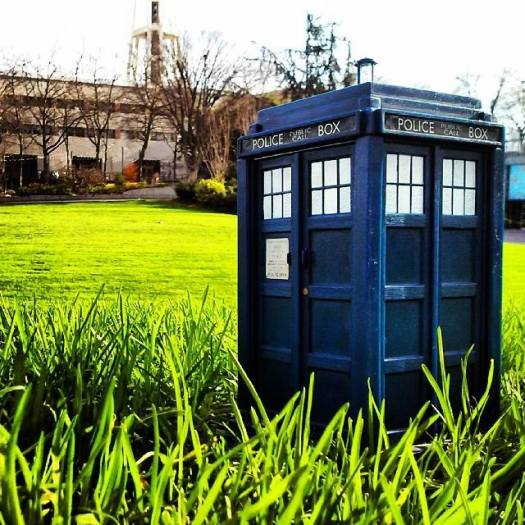 I shot this yesterday using my favorite kitchentop decoration. Waking up today, this pic has grown on me, at least for the colors. So, I thought again, maybe for those not yet tired of the Doctor Who…

50 years yesterday (1963), did this strange show called Doctor Who air on UK television. And ever since, this science fiction series engrained itself in pop-culture, slowly rising from children’s programming to the current hardcore geekfest. Who would have thought? The adventures about an odd traveling man of time, often companioned by a young lady friend, who with his transport of an old British police box (Time and Relative Dimensions in Space) could journey through the strangest of worlds, escape terror beyond imaginations, meet the most interesting friends?

Here is a quote by famed writer Harlan Ellison on Doctor Who, from an introduction in book DW novelizations in the late 70s:

“Star Wars is adolescent nonsense; Close Encounters is obscurantist drivel; Star Trek can turn your brains to purée of bat guano; and the greatest science fiction series of all time is Doctor Who! And I’ll take you all on, one-by-one or all in a bunch to back it up!“

Such interaction would be fun to watch, as Harlan does not hold back on his profanity. Also, his Star Trek anger is probably personal (perhaps the sure contender, since the other two were then not serialized for television) with his anger an episode he originally penned.

Doctor Who the greatest? I never thought of it. I like them both. I think Doctor Who is the greatest science fiction series of recent time.

And now, The 2020 Harvey Award Comics Industry Winners are…

Cheering on my SDCC time with Comic-Con@Home