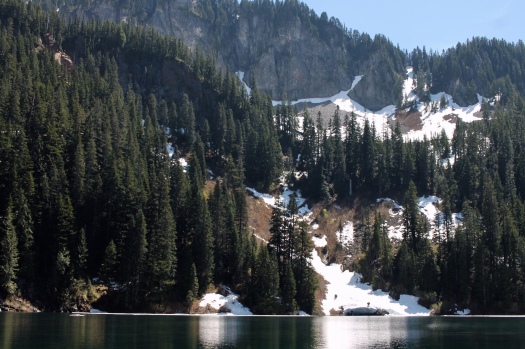 Recently, I set upon a long hike in the Mt. Baker-Snoqualmie Regional Forest with a group, to Annette Lake.

The sight itself deserves my special posting as an amazing visual spot, high up in the mountainous regions of the middle Washington State. The lake is medium size, with much of its surrounding area closed off to visitors. There is no man-made developed shore area or plank, just some natural spots for viewers to appreciate the still serene beauty and untouched landscape. Stepping in the water at this time felt icey, as we heeded warnings to not proceed further in.

Here is a low-grade panoramic shot from my phone:

The only way to reach Annette Lake is through a 7.5-mile round trip trail. Half the hike is uphill through a deep forest mountainside over switchbacks, small waterfalls, and a little snow up high. The elevation gain is about 1800 ft, where the lake signals the peak and destination of the trail.

I advise good hiking boots for the path, and for the current time while the snow sits up high..bring trekking poles. The trail is well maintained and easy to follow, though one should take it slow with its rocky parts and slippy elevation. Dogs are welcome on the trail, as many brought their canine companions.

My friend’s dog Ruby joined our group, who enjoyed the snow part very much. 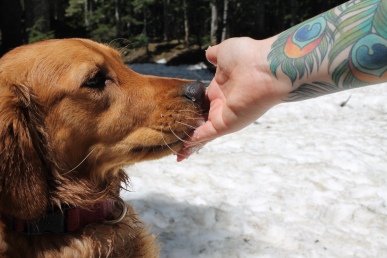 The Annette Lake trail itself offers more interesting distant views, of which I will share in another posting, soon.

Meanwhile, to anyone interested in checking out Lake Annette and the trail to it, visit the official site for more info, at www.wta.org/go-hiking/hikes/annette-lake.

Lately, the warm and sunny weather has brought out the best in people.

For me over the recent weekend, the effect been more exercise by moving around more. I also got some nice new walking shoes, making my recent walk through the West Seattle longer, more enjoyable. Also, I did some reading and writing

Alki Beach of West Seattle felt especially pleasant, with people in abundance doing many good things possible and special to this wonderful climate. The best of which included volleyball, kayaking, jogging, conversing, holding hands, eating ice cream out of a cone, dog-walking,  and leaving their mobile devices alone.

The summer is about a month away, with more days of good sun to make up for some of the gloom and freeze of the prior months (at least here in the Pacific Northwest US).

I shot the picture last Saturday afternoon. No idea on who the bicyclist is, but his balance skills are excellent. And I think he probably appreciated the cheers in the distance (and a big thanks to him for allowing me time to get my camera ready). I could also overhear someone whistling and complementing his physique. That got a chuckle out of me.

An hour after the noon during my lunch break, I enjoyed the warm weather with a mix of blue sky, passing grey clouds and sunshine. The calm was highly appreciated for my otherwise busy life.

What a beautiful day.

A few hours later, the rain suddenly poured heavy, with a little thunder mixed in. I borrowed an umbrella from work, which soon broke while waiting for the bus (came 15 minutes late).

Eventually, the rain slowed, just in time for my long bus ride to finally end (traffic from Bellevue was a bit rough). The atmosphere of downtown Seattle felt a bit humid from the mix of warm weather and sudden dampness. I walked steady pace in a homeward direction, looking forward to a big bowl of tomato soup.

I forgot the broken umbrella, still on the bus. Oh well.

On the way, I passed by the public use ping-pong table in the outside recreational open of Westlake Park. I stopped, and admire its smooth, wet reflection of the world above, after these sudden changes of unresting weather.

I had a plan to relax outside, though sometimes that takes effort beforehand.

After sleeping in late, catching up on messages, fixing breakfast, finishing laundry, playing Boggle on my phone, taking a shower, answering more text messages, and then watching one more episode of the new Lost in Space series on Netflix (it’s quite good).

Then, I could ignore the bright sunshine any further, and finally left my apartment a little past 1:00 pm).

I took the bus to the Fremont neighborhood, walking into the weekly Fremont Sunday Market. The area is a few blocks long, with many tents and tables selling a variety of used and new goods. I highly recommend this path, for gifts and interesting home decoration. With all that, strolled through the merchant tents, browsing but not purchasing. Sometimes, I just enjoy looking at random things.

I ended my stroll at the food trucks, feeling somewhat excited about the “Taco Libre Truck Showdown” going on (and the reason I came to the Sunday Market), where tacos of special variety were sold. To participate as a taster of these tacos, one would likely spend much time in a long line for pricey, tiny “street” taco resembling eats. I tried a couple of trucks, and was no happy at the bits of things normally I do not associate with tacos thrown in for that  “gourmet”  or “fusion” flavor (arugula, fruit bits, weird sauces I can’t figure out)..and consumed in three or four bites. Or, I just miss my old living regions of Southern California, where taco trucks delivered bigger, fuller tacos at a cheaper price with much less of a line.

I looked for lemonade to consume. Only one stand found in the area, with an absurdly long line for just the lemonade. Perhaps, it was really high-quality lemonade. I did not stick around to find out.

Leaving my disappointments behind, I found a nice spot by the by the Fremont Canal Park passageway and sat down on a grassy area before a large tree. There were ducks, geese before me in the waters ahead. I had a brief conversation with someone nearby feeding the waterfowl, something about the motherhood and caretaking of such.  Then, I took a short nap, did some reading and absorbed a mix of the mid 70’s sunlight and passing cloud cover above.

All was enough to enjoy and make the day worthwhile.