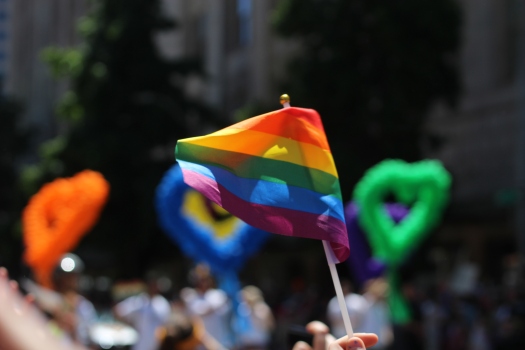 Pride Month reaches to a close this end of June, as celebrations in all US major cities had their parades and festivities. Such is the annual month for solidarity and recognition of LGBTQ members in our civilization for their basic rights, and to coexist freely without the effects of bigotry and persecution.

This weekend also marks the 50th anniversary of the clash between police and gay bar patrons in Manhatten, New York City known as the Stonewall riots. Building frustrations from the local gay community in the late 1960s boosted the modern gay-rights movement, building much in the decades ahead.

Meanwhile here in Seattle, a large parade would draw thousands of people over, along with two major festivals in Capitol Hill and the Seattle Center. I missed most for personal reasons tending elsewhere. Yet, I did take around 20 minutes to watch a little of the Sunday parade.

For that moment, and observing the huge crowds of support, I see great development since the Stonewall riots. LGBTQ activism and solidarity are more freely expressed, with growing support and understanding. But, there remain other areas in our world, where such expression is forbidden and met with a terrible penalty. We look to our own leaders, and some failings with the current administration to help protect what should be equal rights to openly engage in same-sex relationships, have legally accepted civil unions, and domestic partnerships. Also, not be discriminated in for employment situations, public accommodations, housing, education needs, and more.

Therefore, the marches and festivities shall move on in more Pride months, perhaps for another 50 years at least. Along the way. humanity collects and grows as we learn to love better. 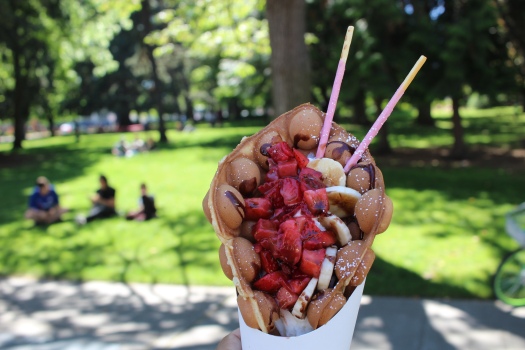 From that, occurred a fitting theme to the latest South Lake Union Saturday Market, a local weekend event happening through the late Spring, and much of summer. They had an ice cream social, where desserts of frozen sugary joy would be sold and served on a lineup of small trucks, carts, tents. Such was perfect for this warmer than expected day of brighter, hotter sunlight.

The most eye-catching for me was a tent for Puffle Up. Their specialty was a special form of bubble waffle, folded over to hold strategically placed additives of the tasty and sweet variety (popular and possibly originated in Hong Kong, but not sure). Choices were great, where I picked the one with strawberries, bananas, chocolate, whipped cream, and Pocky sticks. Adding ice cream would be a small priced extra, which I turned down.

What a beautiful thing this treat to behold, to stare at for a long moment (pictured above), before devouring it in a state of blissful joy. The tasteful combination is similar to a crepe, but with the waffle texture and its open-air spots, giving a focused experience of collapsing squish.

I recommend Puffle Up, especially if you are an outgoing person who loves local festivals and markets. You can follow them on Facebook and Instagram, to learn more. There’s also a Yelp list of Seattle area places where bubble waffle desserts are served.