Over Lake Washington from Bellevue to Seattle on the 520 bridge, around 5:30.

Meanwhile in California, the Seahawks would beat the 49ers (20-3) in football.

Beautiful, the sunset is.

Here we are, Back To The Future!!

It’s the day I saw when I was a kid back in 1989, after anxiously in line for the awaited the sequel to the first Back to the Future movie. How excited I was, to not only join up again with Doc Brown and Marty McFly for another time traveling hijinx, but to take in new exciting vision of the future.

Hardly anything we got right to this present day, but some kinda close and others incredibly distant. Still, here we are with somethings that would make even Doc Brown exclaim “Great Scott..” Smartphones! Facebook! Downloadable movies! Drones! Selfies! Wristband fitness monitors! Pumpkin Lattes!

I’m sure there’s more amazing things out there I haven’t thought of, and more to come. But it’s cool to see since 1989, that we have come to this point where a lot of past science fiction is now reality.

Now, where did I put that sports alamanac?

The early evening looking out from Westlake Center (Downtown Seattle) toward South Lake Union in the distance.

This day, not the cheeriest of days for many out there, as much of the day had gloomy skies with rain finally this evening. I expected the rainfall since the morning. I also expected the Seattle Seahawks to beat the Carolina Panthers. One expectation eventually happened while the other did not. O well, Go Hawks for next time!

Anyway, I am grateful for this little bit of rain. Downtown Seattle is beautiful when wet.

Loving the rain on the fallen leaves..

Check out the Olympia town in Washington State, when exploring the Pacific Northwest.

Olympia a wonderful stop, halfway between the Portland and Seattle cities, close to the 5 and one 101 freeway intersection. This area is also the best stop for food and a stretch when traveling the between the major cities in no particular hurry. You’ll find much to love for any length of time you spend here.

A few things special about Olympia. You will find much art around many corners, more notably upon the walls of allies and businesses. This brings much color and uniqueness to the area. There are also some fantastic sources for literature, with some bookstores I checked out (Browsers Book Store and Danger Room Comics Store). The variety of food is excellent, with the best of it from local businesses. Also, lots of vintage antiques are also visible and up for buying. In between and throughout, you may also notice multiple signs of social activism and awareness with Black Lives Matters signs, climate change awareness, and other messages of modern progressivism. Olympia shows character aplenty in its overall presentation.

For me, it was all about stepping out from the weekday work stress. With a friend as company, I went to explore, and seek interesting visuals, eats, and a little shopping. Olympia did not disappoint, as this was my second visit to the city. Last visit, I barely walked around. This time,we had no particular direction here, other than its main downtown center.

Here are some findings in pictures, with some more notes on the area..

One of Olympia’s prominent buildings, the Old Capitol Building. It’s now the office home of the Superintendent of Public Instruction since 1906. Before in Sylvester Park, stands John Rankin Rogers..twice governor of Washington State, who believed in giving a fair education to “every poor son of the commonwealth.”

Some up close sculpting on that building. Love the detail here..

The charming outside of Darby’s Cafe and neighboring local businesses on a 5th avenue block. I love the random little deco touches upon this old building…

The Capitol Theater across the street from Darby’s. I love the look of this old movie theater, and will look into seeing its inside in a future visit. 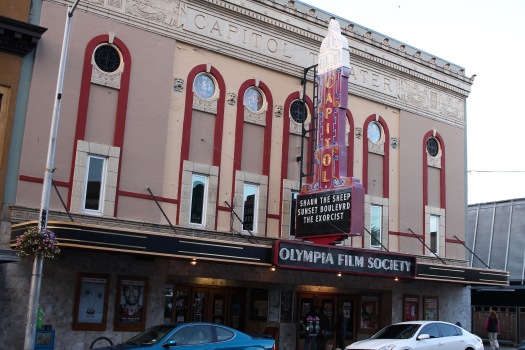 The inside of Darby’s Cafe, to a wall of wild art…

Above and around inside Darby’s Cafe, a tribute to the Wizard of Oz. The food was quite good too. I had a Brocco Burger (Broccoli, white cheddar, other good stuff) with fries (a bit too much they give) and a root beer float (root beer can be replaced with an alcoholic alternative). All quite good, and filling enough until my trip back to the Emerald City.

Some art on the side of The Great Cuisine of India restaurant.  Many of the following pics are select examples of the overall mural art scene of the Olympia area.

The Olympia Rafah Solidarity Mural. from About this from olympiarafahmural.org. “Four thousand sq. ft., interdisciplinary mural with over 200 participants from all over the world. Project celebrates and mourns Rachel Corrie through action. Rachel was born in Olympia and killed in Gaza when run over by an Israeli driven bulldozer in 2003. ORSMP mourns and celebrates the lives of all who struggle for justice.”

Up close on a select section of the Rafah Mural..

A mural inside the alley of next to the building of the Old School Pizzeria. A wonderful and very colorful tribute to the imagination.. 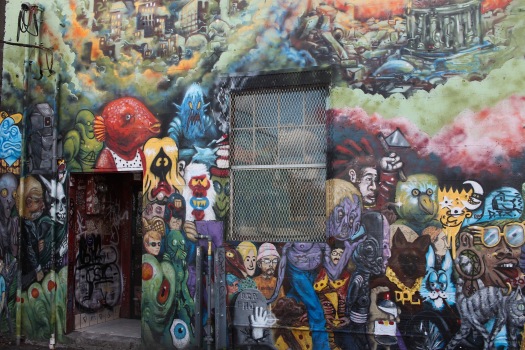 The best thing for us comic nerds out there, this old school tribute to the classic Marvel Comics. Located to the side of the Old School Pizzeria. I love this.

Capitol Lake, with what I think is the Washington State House of Representatives capitol building. 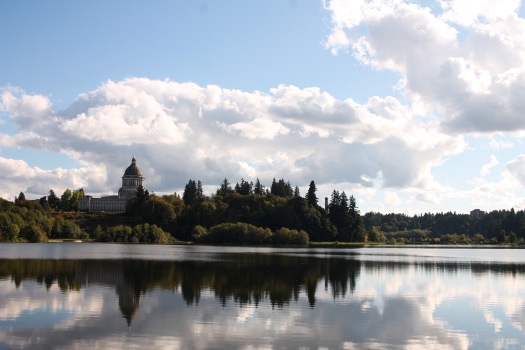 The lake itself is very serene, and calming for anyone who enjoys a nice walk in the park. 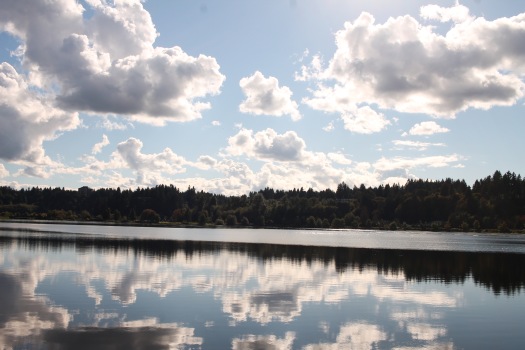 That’s all for now on this amazing area of the Pacific Northwest. I will be back, with a look at other interesting signs and aspects of this interesting area.

The latest trends in fashion, beauty and style