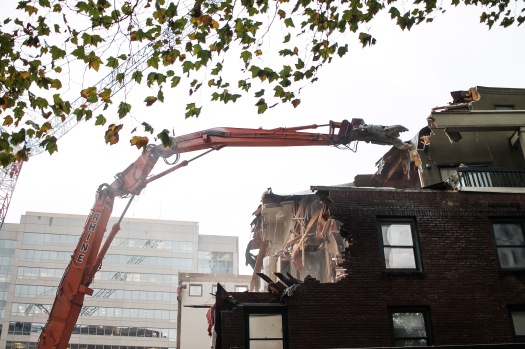 There goes a little more of yesterday…

Meanwhile upon a nearby hill, a beloved thrift store is on its last open day (Value Village in Capitol Hill). In the opposite direction towards the bay, a local tourist attraction will soon exist only in memories (the Gum Wall, see last post). Look all round Seattle now, and you will many cranes and bulldozers galore; removing what was and building towards a new skyline.

There is no rest for change.

Here I was told, stood the 811 Stewart Hotel (see edit below new info. The building was of two, and stood next to the old Greyhound bus station and parking lots for a time. I could not find any information on this building or the other not pictured. From guessing on its old school brick structure, it was around for some decades.

Edit: Thanks to our reader Wedgewood in Seattle History, for some added information on the front building in the picture, leading to a helpful ink via a historical building database on seattle.gov, with this extra info on its history (known as the Bonair Apartments):

“This building was designed by architect Charles Haynes as an “Apartment Building for Amelia Hemrich, according to drawings from July 8, 1924. (Amelia Hemrich is presumably a member of the Hemrich family, long associated with beer brewing in Seattle. The family commissioned several brewery buildings, completed in the 1900s, including one originally located at 1275 Mercer, but demolished for the construction of the 1929 Kenworth Motor Company Building, in the Cascade neighborhood). Known as the Bonair Apartments, this apartment building was completed in 1925….

In general, the building, which was renovated along with the neighboring Ray Apartments in the early 1990s by Kovalenko Hale Architects, has retained a high level of historic integrity. Windows have been replaced in kind and at least two of the storefronts appear to be surprisingly intact. The building is notable for its terra cotta trim and ornamentation.”

The building was eligible for historical preservation, but failed its nomination in 2013.

In place, will be the tallest hotel yet in this city, boasting 1,200 rooms and 41 floors. On the good side, this should give many jobs above the heightened minimum wage to locals (at $15.00, when done). Also, downtown Seattle could use more hotel spaces for visitors for large events at the Convention Center.

Yet, it’s also a sign of the passing days and new challenges ahead. I can’t say I will like the new building, as I enjoyed Seattle for much of its vintage architecture. Many buildings here and the surrounding areas are coming down. In their many places, will be spots targeted and reserved for the upper elites and better fortunate of this city’s grand growth. Demographics I think will further change, along with traffic and property rates. Perhaps by then, I think I will become bored with these new surroundings, and move on.

But for now, here is another picture of yesterday..