May the Fourth be with you!!!

Though, by the time you read this, the day probably passed for 2022. Still, a positive message brought to you by the peak of pop-culture nerd fandom. This is Star Wars Day, as fans come to recognize as a play on words, being the Fourth exchangeable for the Force. It’s dorky, but whatever. There is much in our world to keep us stressed and sad, and sci-fi escapism is sometimes a necessary distraction, and to sometimes help keep us positive in tough times.

So, today among friends who love and cherish many things Star Wars, we looked back on the best ways the Force full franchise touched our lives. I realized, going through every era of its development, from the original trilogy to the Disney Plus era. Many games, books, fan films in between, I have delved into its extremely extensive lore, digged the memes, can pinpoint and recognize nearly every obscure character from the movies. I love the Star Wars, as George Luca’s vision grown, expanded, giving us much to ponder in our imaginations to further shape and dive into. Star Wars is the work of many, cultivated by its fandom.

Looking back to the beginning of my love for Star Wars, and I would like to share some memories of where it all began for me:

My first Star Wars movie is The Empire Strikes Back. I saw it on VHS as in my earliest Elementary school days at a friend’s house slumber party. Yes, I would have been shocked to learn Vader was Luke’s father in the pivotal moment, if it wasn’t spoiled by every other kid in the room. My love for space reptilian men, started with Bossk.

My first Star Wars toys were some old early Kenner figures from the early 80s. I recall first having Darth Vader, Obi Wan, Han Solo, Artoo, and Pruneface. Eventually, I would find more, and put them into a very used Millennium Falcon, Kenner brand playset with missing parts.

My first Star Wars book was a Return of the Jedi Star Wars storybook. For reasons I best not go into now, I was not able to see Return of the Jedi in theaters when it came out. So, I learned the story with great delight from the children’s text with full pictures. I reread it many times, very thrilled and satisfied at the conclusion. Boba Fett was the coolest, even though he played a small, and very sad part.

My first Star Wars video game was the super awesome video arcade machine with the 3D vector graphics. I loved the steering control, movie realistic sounds, and thrill of blowing up the Death Star three times usually, with one quarter. To this day, it’s still an awesome game!

My first Star Wars movie in theaters was the Special Edition of Episode IV in the movie theaters. Seeing this first, even with the changes, on the big screen felt right.

I would like to write more about Star Wars in good time, as the Force I feel will always be with me. I have much to share on the current stuff, my growing weird love for the prequels, and a lot of obscure stuff. In good time, I will. But for now, may the Star Wars be with you too.

Another busy day today, but I took some time to enjoy this May 4th tradition that is now Star Wars Day.

I spent my lunch and later evening reading a some short stories out of Star Wars: From a Certain Point of View, a stellar anthology of 40 short stories from 40 writers, focusing on the viewpoints of non-main characters present during the events of Star Wars: a New Hope. I really love this idea, and enjoying pretty much every story so far (halfway through). I highly recommend for anyone who loves Star Wars, or just enjoys a good short story where anyone in a galaxy far, far, away has a special story to share.

The day is almost over now, but I love Star Wars every day. It’s just one of the many great things that binds us together. and inspires me to keep adventuring. And remember…

Anyway, Happy Star Wars Day, even though it will over by the time you read this…

Yet, the many of us don’t stop really enjoying and appreciating those Star Wars.

Star Wars is with us forever. What a silly thing this science fiction franchise does for us! So many among love the characters, get deep into its expansive lore, praise, or groan emotionally at creative turns through the years across all mediums. And how remarkable and surprising was that Star Wars: Clone Wars finale? 10 out of 10 lightsabers up for me!

What is it about Star Wars appeals to so many beyond its initial groundbreaking movies from decades ago? There’s a huge plethora of cool creatures, spaceships, robots, action with laser swords and laser pistols. There’s weird space politics, mystical religions, various cultures, and lifestyles that keep growing with the many more movies, games, serials, books, whatever else.

I believe it’s the binding and bonds between established characters. There are ongoing themes about friendships, family, rivalries, comradery, and the sense that we are all connected no matter how far apart in planets we are. You can be a farmer, a robot, a princess, a bounty hunter, a soldier, a wizard, a princess, a knight. Somehow, there’s a possible connection in the universe for anyone to partake. Then go on an adventure, discover something about yourself or others, check out an environment opposite of your familiar zones, get the rush of an exciting and very high stakes battle. From all, gain something new for surviving the experience. Star Wars is just a fascinating thing that happens through its pop culture that will never end as long as humanity enjoys the escapism that science fiction brings us together.

May the Force be with you, always!

I much enjoyed the new Star Wars: The Last Jedi movie.

It’s not a perfect movie, but it’s got all the stuff I ask for in a Star Wars movie; awesome visuals, big space and ground battles, dueling light sword wield wizards, interesting characters with great development and interaction, light humor, and a lot of answers to fictional questions.

The picture above (Rebel Pilot and Biker Scout) are of two dressed up persons in front of the Cinerama theater in downtown Seattle on Friday Night. I saw the movie yesterday, and was not dressed up (though I wish I was).

That’s all for now. May the Force be with you. 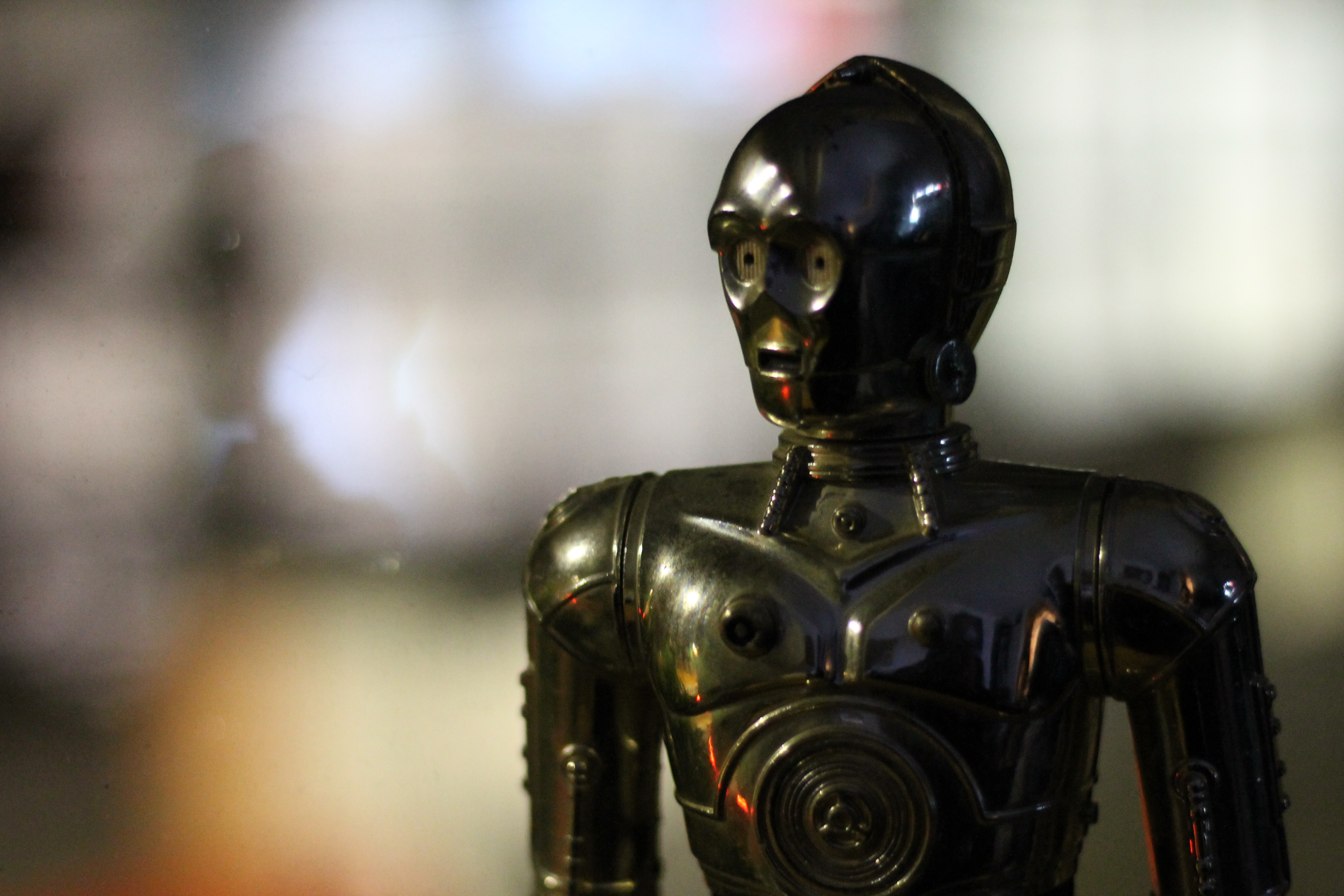 40 years ago on this day, a cinematic vision appeared detailing interesting conflict in a long time ago, in a galaxy far, far away. That was the first the world would truly know of the STAR WARS!

You may have heard of it. If not, here is a trailer.

I would know of it a bit later in my childhood, initially through the first sequel. But its presence was clear, and ingrained into my constant pop-culture appreciation for all things that involved dueling space wizards, weird-looking spaceships, bizarre aliens with mundane lifestyles, and robots that beep or speak with English accents.

My favorite character in the original is C-3PO (See-Threepio), a humanoid shaped droid with fluency in over six-million languages yet still seems to know so little of the universe around him. He discovered much but with hesitation, guided by his beeping, short astromech droid companion. His journey is not center through the film, and not very useful. But his humorous observations and interactions give the story a much needed dimension from someone less familiar or interest with galactic conflicts and strange religions. He just tags along, and provides funny comments.

My favorite Threepio line of the 1977 classic:  “Don’t call me a mindless philosopher.you overweight glob of grease!.” 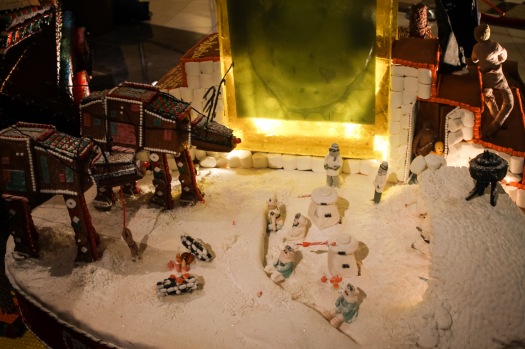 I recently checked out this year’s huge seasonal Gingerbread Village at the Sheraton Seattle Hotel. Every year has a theme and this time it’s all to a galaxy far, far away.

It’s all Star Wars!!  Also, the Village promotes the cause of the Juvenile Diabetes Research Foundation (JDRF) for treatments and research. Children dealing with Type 1 diabetes helped with each display, working with various architecture and construction firms to make each one impressive.

I am huge sci-fi, nostalgia geek at heart. The kid in me of all ages in me cheered to this display collection of all the movies, which I enjoyed (even The Phantom Menace). I also look forward to the next chapter, The Force Awakens.

The display is open to the public and free, and it’s located near the Washington State Convention Center in Downtown Seattle, at the Sheraton hotel. The Gingerbread Village is here until January 3rd, 2016. You may also be encouraged to donate money to the (JDRF) Northwest Chapter while there. For more site and event information (and donation info), click here.

here are below are a few pics of the display. I posted a lot more with more info about on another site I post for, at strangerworlds.com. Click here for more awesomeness! 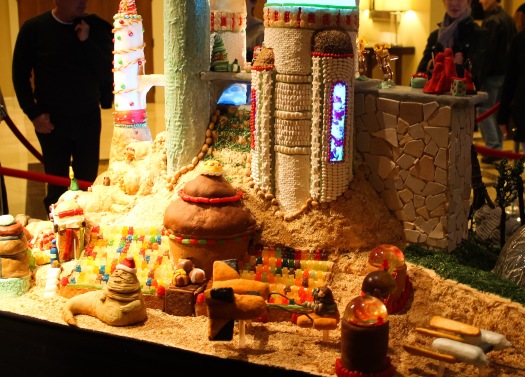 Dislike Mondays, I sometimes do. Changes that, a good sunset does. 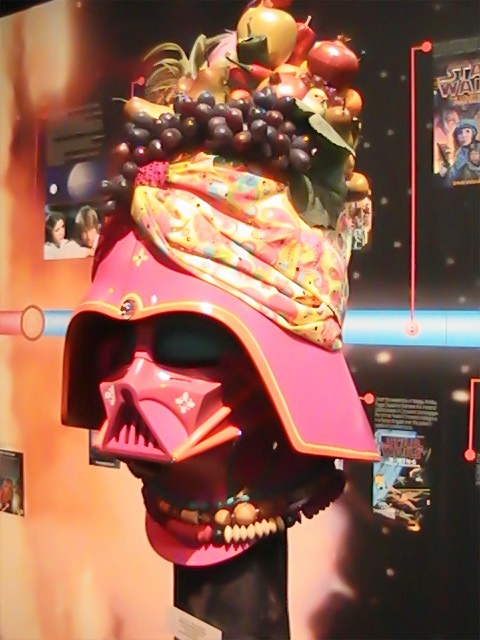 get a free comic book!

a new Doctor Who episode!

is a glorious day 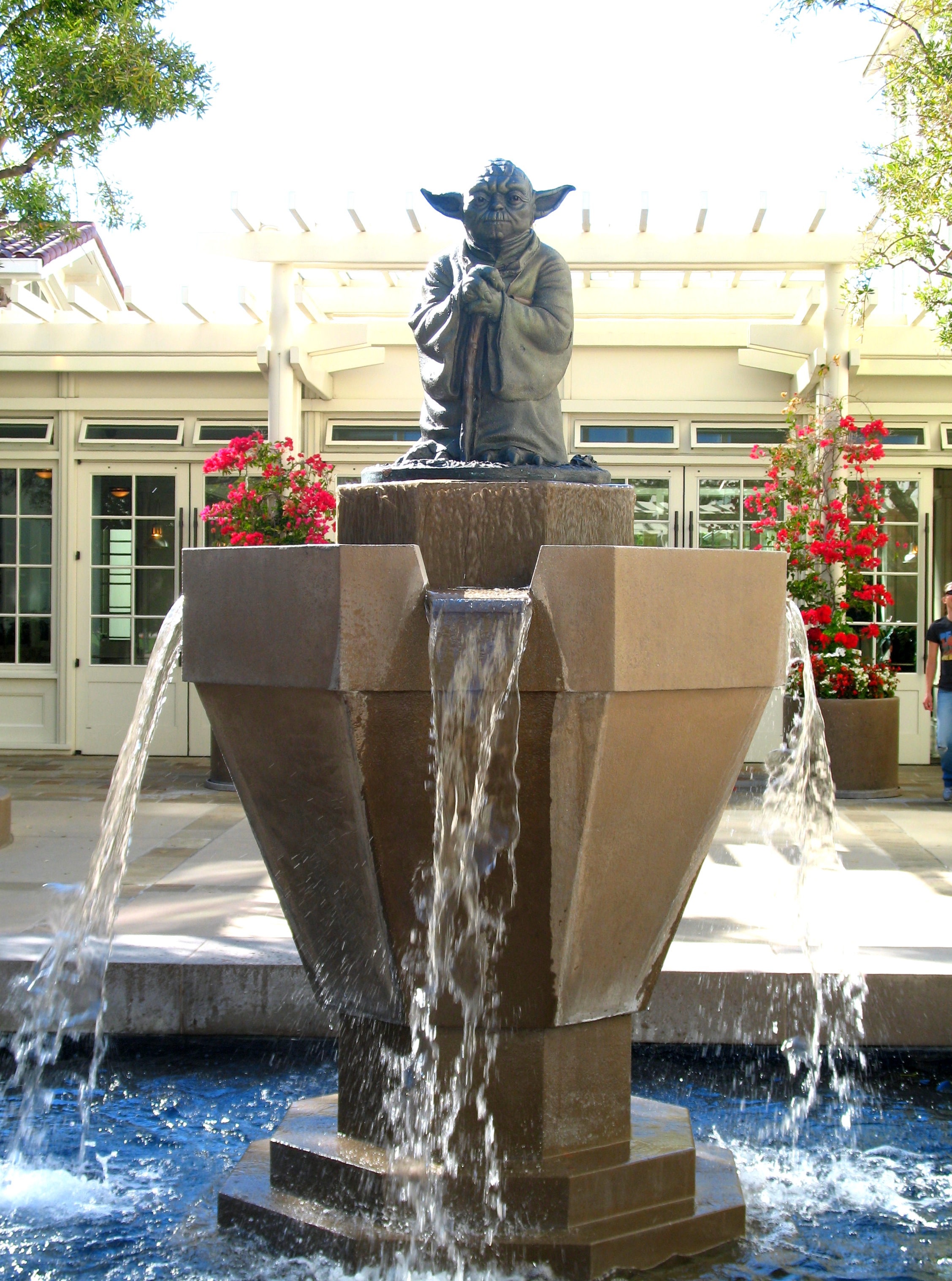 Happy Monday. For many reading this, this is the beginning another long work week.

For some, this means heavy goal setting and impressing ourselves. For others, relentless work including: letters, proposals, brainstorming, massive paperwork, countless  emails, calculations, heavy lifting, exceptional customer service. Those in need of work are likely on the job hunt: revising resumes, pressing outfits, other self-sellings. College students are back from spring break, probably stacking notes and outlines toward their semester finals. Also for many US citizens, that tax deadline is faster approaching.

In times of stress, we could use a motivational iconic figure. Someone, whose wisdom comes from a galaxy far away. He could say something wise and wonderful, out us on track, ready those cover letters, develop solid thesis statements, place those exact numbers on charts, straighten our ties, make smiles effortless.

Seek Yoda, the wise and powerful Jedi from the Star Wars franchise.

“Luminous beings are we, not this crude matter.”

On faith and leaving room in mind for the impossible:

“Control, control, you must learn control!”

“Difficult to see. Always in motion is the future”

“Don’t give in to hate. That leads to the Dark Side.”

“Fear is the path to the dark side. Fear leads to anger, anger leads to hate, hate leads to suffering.”

On education progression and necessity:

“Mind what you have learned. Save you it can.”
“In a dark place we find ourselves, and a little more knowledge lights our way.”

“Train yourself to let go of everything you fear to lose.”

So there you go, all from a wise wizard elf-man, as quoted from a few Star Wars films (mostly Empire Strikes Back). Think, for the next forboding moment. What would Yoda do, say? How would he handle a troubling situation or stress buildup? His calm demeanor and self confidence produced heroes, helped win wars, organize large groups, and kept him looking good for over 900 years.

The picture above, is a life-sized Yoda statue on a water fountain (photo by me). You’ll can find the entrance to the Lucasfilm Ltd. corporate headquarters office in San Francisco, within the Presidio area, very near to the famous Palace of Fine Arts. For the exact location, click here.