Now turning the wayback machine to the last weekend, and continuation from my Part 1 adventures posted days ago..

So here I was at the beach of Carkeek Park, after an hourly hike (prolonged because I kept stopping to look for birds to photograph). I was hoping for a beach less crowded than the Golden Gardens of nearby Ballard, where I can catch up on some reading in a peaceful non-interrupted setting. This beach had less people, but also less land.

Then, those hazy skies intensified from the distant brush fires. But, the air had a weird, good feel to it. I would imagine for a moment, this was like some alien planet from Star Trek or something. Not sure what the feeling was, but I enjoyed the somewhat surreal atmosphere.

Also, my camera had plenty of battery life left. So, I snapped some pics at times. Here are the best of them..

Before the beach, i came across this artsy piano crosswalk. There seemed to be no specific purpose to this, being that playful hopping on this would put one in danger from the sharp turn around the corner from coming vehicles.. But, I like it..

Also before the beach, a massive railroad. A freight train would come through every now and then. Just wait.. 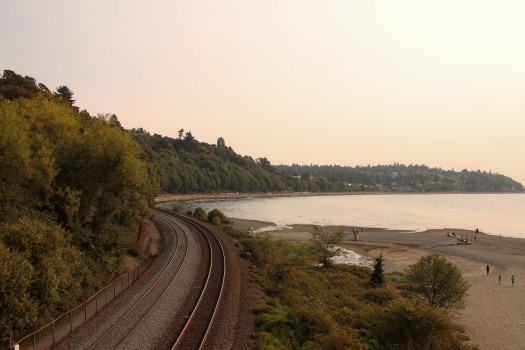 The bridge over the railroad. I was hoping to capture a shot of this with less people on it.

The southern part of the beach, with many rocks during the low tide. The birds gather, left alone by the humans…

A passing boat under the hazy sky. The sun coming through gave the water an eerie effect at times..

I hit up a thrift store on my way here, and brought an early last century music dictionary there. Interesting read, as I love to learn obscure stuff..

I also got this book of science fiction short stories from an author I never heard of. I love the cover. Some of the stories inside were quite good..

Someone doing a bit of fishing out there, I think.

And hey there, here comes the train!

That’s all for now. I enjoyed this small little adventure in two parts. I hope you did too.

The latest trends in fashion, beauty and style