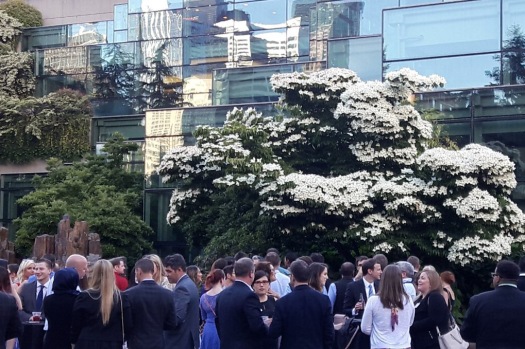 I took this shot with my phone. The location, being at the Washington State Convention Center in the outside park area. I am unsure of why I bothered taking this shot.

Perhaps, it was the interesting blooms on the large tree, giving an interesting look from afar. Or, the foreground of classy dressed people in some private event (being that it was fenced off and I was not invited). Or that, this area is normally empty on a weekday afternoon, and I originally passed through here to have a sit-down to relax on the nearby usual spot for sitting. I tend to take pics of things out of the ordinary.

Then, I looked at this later. And, I think it’s also the distorted backdrop of Downtown Seattle in the background. Perhaps, I think there is a combination of it all; where Seattle is now this growing magical land for the upper crust. But there are parts becoming slowly twisted, but go on unnoticed. That’s usually the part of the dream where someone wakes up, right?