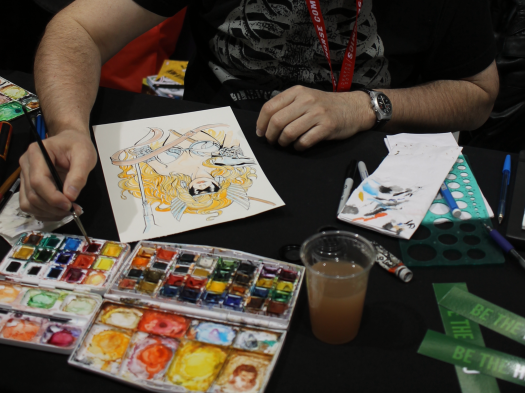 I spent much of this past weekend at the 2017 Emerald City Comic Con, here in Seattle.

Many attended, for which this was its 15th year in annual rotation showcasing the latest in geek culture through various guests, events, and merch. The good portions were the plentiful choice of awesome products, the many attendees in colorful cosplay, some cool guests, and plentiful opportunities to make new friends and discover new obsessions. The sad portions ran the lack of promotion towards the current comic book industry. Its artist alley ended up in a separate smaller space above the main floors, benefitting less for reaching out to possible new fans. The comic dealers and publishers were kept further to the back, while non-comic dealers carried a heavier presence in the main hall showroom. TV and movie celebs were promoted far more to the audience, with barely any marketing toward the new and exciting stuff happening in the comic industry. This is sadly the direction of many “comic cons” lately. I wish they would just stop pretending to emphasize that.

All that aside, I still love these events. The interaction is still there. I met a few creative people, whose work I have enjoyed past and present. I took part in some fantastic gatherings, bought a lot of cool things, and enjoyed myself with friends here and there. I will post more on the details in the near future.For now, I must rest. Excitement on a large scale can also be exhilarating.

In the above picture is Barry Kitson, a comic book professional artist from a wide range of well-known Marvel and DC comics titles.The character in the picture is Angela, a heavenly warrior currently residing in the Marvel Comics universe. Barry was sketching all weekend for the Hero Initiative, a non-profit charity helping comic creators in a time of desperate need. For more info, visit www.heroinitiative.org.

Cheering on my SDCC time with Comic-Con@Home

Commanders in Crisis, a new and different superhero comic series coming up

The official site of Jarold "Sparky" Waid a place for yellow cab drivers!

Cats and Trails and Garden Tales